At the Sharp End: Cowes Classic Week
A showcase of Classic boats and classic cars in the form of Cowes Classic Week is still on course to run between the 25th and 31st July in Cowes. Organised by the Royal London Yacht Club, Commodore David Gower announced this week "We hope to run a 'full fat' Classics Week".

The addition of Cowes Classics Day on the 30th featuring classic cars and classic power boats is to be a very special and glamorous day. The latter will celebrate the 60th anniversary of the Cowes-Torquay race initiated by Sir Max Aitken when Commodore of Royal London Yacht Club. A display is planned of over fifty cars on the Parade together with exhibits from the Cowes Classic Boat Museum and power boats on the London Landing and RYS Yacht Haven.

For those whose interest crosses over from historic sails to four wheels this will be a visual feast. "We will make a final decision on June 15th and in the meantime planning continues". 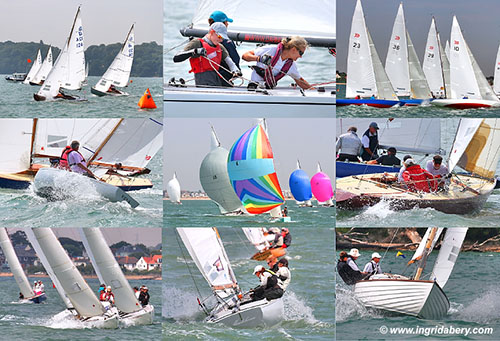 The interview with Louay Habib includes stories, pictures and videos of Dee's amazing voyages and news about her plans for the future. 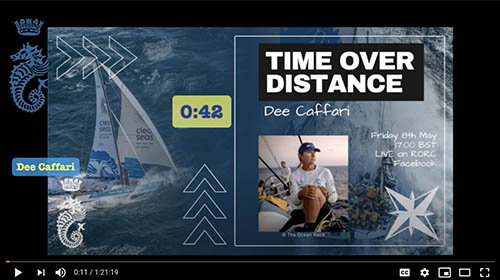 Seahorse May 2020
What's in the Latest Edition Of Seahorse Magazine 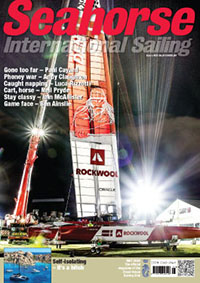 Endless quest - UBI Maior
The young Italian engineers at UBI Maior are steadily working their way through pretty much everything that moves on a modern yacht... and working hard to make it move better

Who'd a thunk it?
Oak trees and acorns does not do justice to how an invitation by Luca Rizzotti to a few of his friends to join him for a bit of fun in Garda turned into one of the most influential events in sailing

Boys of the pontoon
And he still won't wear a tie... Rob Weiland

PlanetSail - On Course Episode 3
The UK's lockdown continues, but there's still plenty to report on. For starters, there's the on going developments with the America's Cup where two of the four teams have managed to get afloat by using some ingenious thinking. INEOS Team UK explain how they use software to replace time in the wind tunnel and towing tank. There's also the issue of their boat's new look as Britannia returns home plus, some more cool footage from the Americans.

I admit to getting all misty eyed over a former favourite class, but manage to compose myself for a trip to a very special yard on the UK's East coast where I found a bigger story that I hadn't expected. Plus, board games and hairdryers!

In Brief:
America's Cup - What the four teams are up to
505 Worlds - Getting excited about an old flame
Amazing Spirits - Much more than just gorgeous boats
Board sailing and hairdryers 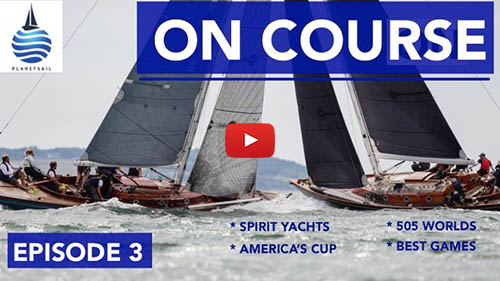 Mark Mills Irish Sailor of the Month for April

Mark Mills was named Irish Sailing and Afloat.ie's Irish Sailor of the Month for April, reflecting a focus on off the water activity during the current pandemic. Mills was recognised as "a breath of global fresh sea air" for the success of his designs from the large to the small.

Singled out for mention were his recent MDO Monte Carlo award for the design of the Wallycento 'Tango' and the success of the Melges IC37 as the latest New York Yacht Club One Design. "While the water is temporarily off limits for most of us, I feel very lucky to receive this honour, and to be able to continue to work through this difficult period."

In a time of inevitable national introspection, the design work of Mark Mills is a breath of global fresh sea air, taking us out of ourselves. Already in 2020, his design work has been recognised with the MDO Montecarlo Trophy for the quality of the biggest vessel to emerge from his County Wicklow design studio to date, the 30-metre Wallycento Tango. And his smaller designs continue to attract, with the rapidly-growing popularity of his Melges IC37 - in which Anthony O'Leary's Royal Cork team took the Bronze at last Autumn New York YC Invitational - a testament to the versatility of this talented naval architect, our International Sailor of the Month for April.

Rule 18.3 Explained
Most protests between sailboats on the racecourse come from situations where boats are going around marks, which is Rule 18. Rule 18.3 (mark room when a boat tacks in the zone) was written to reduce congestion at the windward mark. The rule makers wanted to encourage boats to tack for the mark farther away than three boatlengths, which may be another reason they increased the zone from two to three lengths. With the fast action of boats tacking, turning the mark and hoisting spinnakers in a crowded space, there was too much going on in a very small space, which created too many protests.

Rule 18.3 makes it hard for a port tacker to approach the mark within three lengths and not lose a protest — and the rule makers did that on purpose. The rule gives the boat approaching the mark on starboard a lot of control over the boat tacking in the zone. In fact, UK Sailmakers' rules guru Butch Ulmer has said, "If you tack in the zone, you are leading with your chin." His quote is a boxing reference that refers to a boxer not protecting his head, which often leads to a knockout punch from his opponent. The video below offers a thorough explanation about what rule 18.3 requires of a boat tacking in the zone from port to starboard ...what to do and what not to do. 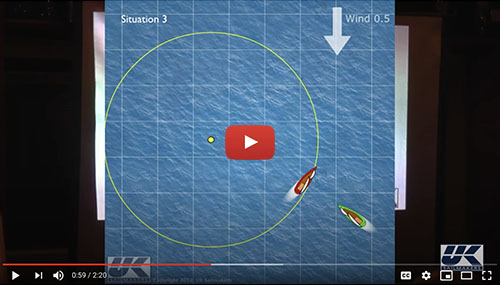 If the prospect of a fleet of four Sunfast 3600s for this summer's Round Ireland Yacht Race is not enough of a sign of Jeanneau's potency offshore these days, the race debut of at least two brand new Sunfast 3300s is also another exciting aspect of the postponed 700-mile race that looks set to attract an international fleet for its 21st edition.

As regular Afloat readers will know, the recently arrived Kinsale-based 3300 supplied by MGM Boats 'Cinnamon Girl' is signed up and, as Afloat sources now reveal, this West Cork entry brings with it the prospect of a UK sistership entering the race too.

As Afloat's WM remarked in March, weeks before lockdown, the launch of the 3300 will make Irish sailing fun again, let's hope he is right!

Watchstanders at the Fifth Coast Guard District command center received the initial call from the Rescue Coordination Center United Kingdom on Wednesday at 7:43 a.m., who reported that a 39-foot sailboat had become disabled due to a non-functional steering box with two persons aboard.

The Fifth District command center activated the AMVER System to alert vessels in the area to the emergent situation and request assistance from them. The motor vessel Torm Laura answered the call and diverted to the disabled sailing vessel on Thursday, but was unable to enact a rescue due to the heavy seas, and eventually departed from the scene.

The vessel was left adrift with navigation lights on and the Automatic Identification System activated so the vessel will be able to be tracked for any future recovery operations. 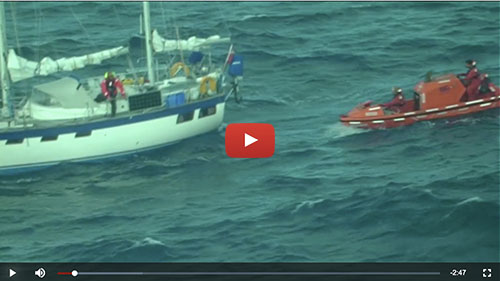 The Day The Wind Blew 25 Knots
Click on image for photo gallery.

On Sunday February 24, 2013 the Australian 18 Footers League hosted one of the most spectacular 18ft Skiff races ever staged on Sydney Harbour. The race was Race 7, which was the final race of the 2013 JJ Giltinan world Championship.

Thurlow Fisher Lawyers (Michael Coxon, Dave O'Connor, Trent Barnabas) went into the race in third place and retained that placing despite capsizing twice while leading the race. One capsize was on-the-wind, the other as the team attempted a mark rounding at the Shark Island Totem Pole.

Adding to the drama of the occasion, a strong North East wind (25-knots) blasted across the harbour in the face of the fleet, and produced some great action and numerous capsizes. Only 19 of the 31 teams entered for the championship were able to complete the course.

The defending champion Gotta Love It 7 team was faultless on the day and won the race, and took the title by just two points from Coopers-Rag & Famish Hotel.

The other winners were the spectators on hand to witness the live action and the photographers who got to capture it all. -- Frank Quealey, Australian 18 Footers League

FLAME is hull #1 of the popular CAPE 31 series of sportsboat. She comes with a complete inventory, and priced to allow the next owner to add sails of their choice for class racing or optimise for local conditions and rules. One-piece Carbon mast, with optional carbon boom.

This beautiful Alfred Mylne designed Fife yard built cutter is pedigree indeed. Both cruising and racing she is a yacht for the connoisseur most certainly.

The Last Word
The streets are full of admirable craftsmen, but so few practical dreamers. -- Man Ray