The 11th annual Wight Vodka Best Sailor's Bar search is on... VOTING IS OPEN FOR THE TOP TEN

Wearn closes on fifth Australian Laser title
With one day left to sail, Matt Wearn, who will be Australia's representative in the Laser class at the Tokyo Olympics, has an unbeatable lead in this year's National Championship.

The past two days have been something of a lottery, with wind strength and direction shifting wildly. But today the wind gods sent steadier breeze, in the 10 to 15 knot range, with only slight shifts in direction that were easily read by the more experienced sailors.

Wearn said the conditions were much improved today. "There was a lot less smoke so it was easier to see where the breeze was. (I had) three solid results today, which makes tomorrow a lot easier," he said.

Jimmy Spithill is making moves at America's Cup challenger Luna Rossa
Spithill joined the Italian syndicate from Oracle Team USA where he won the 2010 and 2013 Cups before losing the Auld Mug to Emirates Team New Zealand in Bermuda in 2017.

Originally listed as a tactician with Luna Rossa, the Australian has been spotted on the wheel of their new 75-foot foiling monohull as they step up testing and training at their base in Cagliari, Sardinia.

Luna Rossa have long-serving Fancesco Bruni as a helmsman but they would be foolish to ignore the steering claims of the vastly experienced Spithill, one of the best sailors in the foiling game.

Spithill's role at the helm was revealed in video by SardiniaSailing.it as Luna Rossa continued testing in some heavy seas just before their Christmas break.

Luna Rossa, as Challenger of Record and head of the small fleet trying to sort out a winner to take on the Kiwis in March 2021 in Auckland, want the upper-wind limit set at 20 knots.

As revealed by Stuff, Team New Zealand have labelled that "ridiculous" for Auckland conditions and they want a 24 knot limit.

The first of three America's Cup world series regattas will be sailed in Sardinia in April.

Marlow Ropes are delighted to offer visitors attending BOOT Dusseldorf 2020, the opportunity to enhance their seamanship skills with an interactive rope-care workshop in the Re-fit Centre Hall 10, Stand D21.

"Sustainability in rigging: Why choosing better quality rope is good for both your pocket and the environment." Will be delivered by Marlow Ropes expert Graham O'Connor who will provide tips on rope maintenance to make your lines last longer. The workshops will be held at the following times and will be followed by splicing workshops on the Marlow stand D21.

Marlow's Technical and Innovation zone on Stand 10D21, opposite German Distributor Gotthardt. will offer visitors an education in rope and, in addition to splicing, visitors can try various knots, test which ropes work best in cleats, spot rope fatigue and lifetime indicators and learn about Marlow's technical innovations included in their Grand Prix range.

Marlow will also be showcasing their award-winning Blue Ocean Dockline - a sustainable mooring line that is made from 100% waste plastic bottles. The pioneering product, a first in the industry is currently in use by a number of high profile race teams (including the 2019-20 Clipper Round the World Yacht Race, 2020 Vendee Globe sustainability campaigner Conrad Colman, the 11th Hr Racing Team and Marine plastic conservationists XXPedition) and continues to gain popularity with a Special Mention awarded at the DAME Awards in 2019.

To find out more visit www.marlowropes.com

At least two teams have begun construction of their bases in the lead up to the 2021 America's Cup.

On November 30, 2019, the largest new structure in the project, the Hobson Wharf extension, was handed over to Luna Rossa Prada Pirelli, the team of the Challenger of Record.

Some work has now begun on foundations for the teams base. The berthing area for the teams chase boats, and AC75's appears to be complete.

On Wynyard Wharf the demolition of the silos is largely complete. The concrete platforms for INEOS Team UK and NYYC American Magic are complete and have been handed over. INEOS Team UK has started base construction.

The base allocated to Stars + Stripes Team USA is due for completion later in 2020.

The remaining base area on Wynyard Wharf not required for the 2021 America's Cup will be utilised in a public, Cup-related facility.

Boyan Slat, Founder and CEO of The Ocean Cleanup, announced that this plastic trash will be transformed into sustainable products, that will be sold to help fund the continuation of the cleanup operations. To confirm the origin of these future plastic products, The Ocean Cleanup has worked with DNV GL, an international classification society, to verify plastic that is removed from the ocean.

The purpose of The Ocean Cleanup's first mission in the Great Pacific Garbage Patch was to confirm the concept of passive plastic collection by means of the natural forces of the ocean. After several ups and downs, in October 2019 The Ocean Cleanup announced that the system is capturing and collecting plastic debris, from massive ghost nets down to microplastics one millimeter in size.

As this will be the first time it will be attempted to produce products fully made from plastic taken out of the ocean, the road ahead for the catch is likely going to be a challenging. If all goes well, the organization expects to launch this premier product made from material collected in the Great Pacific Garbage Patch in September 2020. Details of the product, pricing, and quantity are also set to be announced at this time.

Featured tonight is a famous one that's finish port of the Newport to Bermuda Race: The Royal Hamilton Amateur Dinghy Club, Hamilton Bermuda (RHADC, aka the Red Hole Arguing and Drinking Club)

From a native Bermudan reader:

"The views of Hamilton Harbour all are spectacular, as are the sunsets. Warm, inviting, friendly.... just like Bermuda!"

Is there a special drink they make?

"The local Bermuda specialty, Rum Swizzle, but known by our special name.... 'Loud-Mouth Soup'! Nothing beats a fruity rum drink with a generous float of Goslings!"

The Royal Gazette has referred to it as "the legendary Sam swizzle...perfect for sharing and irresistible to locals and tourists alike". In addition to providing the "swizzle" portion of the 1933 swizzle stick product name, it has been said that this potent cocktail is "as much a part of Bermuda Island culture and cuisine as is the Bermuda onion, the vibrant hibiscus, or the graceful Bermuda Longtail."

This version comes from the Goslings site;

Sip, savor, gulp... and then vote for this year's Best Bar: eurosailnews.com/sailors-bars

The Annual Conference is the central meeting point where the strategy of sailing is reviewed, discussed and celebrated.

The 2021 Annual Conference will be held from Saturday 23 to Sunday 31 October 2021 and will be made up of formal meetings, forums, celebrations and tourism activities. The conference creates significant local spend including approximately 1,500 hotel nights, local transport use, spend at restaurants and tourist activities.

A Host City wishing to apply to host and organise World Sailing's 2021 Annual Conference should submit their initial bid no later than 17:00 (UK time) on 30 March 2020.

World Sailing's Board of Directors will review proposals in April 2020 before site visits of shortlisted cities by World Sailing's Business Operations Manager in May 2020.

With the Nacra 17, 49er, 49erFX, Laser, Radial and RS:X Olympic classes all having their 2020 Worlds take place in Australia in February, and the warm-up events already underway, few top competitors can find the time to attend the Miami event.

The British Sailing Team has only one entry at the USA World Cup event, Luke Patience and Chris Grube in the men's 470, where they will face a top quality fleet including the world champions, Australia's Mathew Belcher and Will Ryan.

The 470 Worlds are slightly later, in March in Spain, so they have plenty of time to fit in the Miami trip.

Although the top British 470 women, the 2019 world champions Hannah Mills and Eilidh McIntyre, are skipping Miami to head straight for the 2020 Worlds warm-up events.

A Breezy Bloody Mary In Store For Saturday
It's set to be a breezy south-westerly for this Saturday's GJW Direct Bloody Mary, the legendary single-race pursuit race near Heathrow which is also the fifth leg of this season's Selden Sailjuice Winter Series.

With almost 250 boats already entered, it's going to be a tough contest with a lot of the big names and usual suspects vying to get their hands on the coveted trophy. Queen Mary Sailing Club has turned this mammoth event into a smoothly oiled machine, thanks to a legion of club volunteers.

The largest entry is the RS Aero 5 class with more than 30 boats, followed by RS Aero 7 with 24 and the Topper with 21. Overall there are more than 50 different classes signed up. Make sure your class is there too!

Online entry will close at midnight Wednesday 8th January. Get your entry in ASAP at: www.sailjuiceseries.com

Entries will be accepted on the day until the entry limit is reached. The Entry desk will open at 8:00am on Saturday 11th and close at 12:00pm, please arrive early and head to the clubhouse to complete the forms.

As with all events in this season's Selden Sailjuice Winter Series, boats will be provided with SailRacer's GPS tracker units with the action streamed live via the internet and available to analyse after racing. On the day head to Training Room 5 to collect and return your trackers, this is the big room on the ground floor. 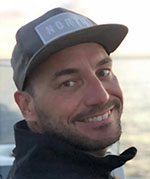 Zane Gills, 37, mysterious disappeared from a sailing boat a short time after he and his brother sailed into Port Vell ahead of New Year's Eve. It's thought his brother left him on board to run an errand but when he returned a few hours later there was no sign of the Australian sailor. He was reported missing, prompting a major search by the Guardia Civil before his body was found under the yacht hours later.

Mr Gills was from Australia but lived in Lymington, Hampshire, with his wife Sarah Gills, the daughter of former Domino's pizza chairman Stephen Hemsley.

Mr Gills previously competed in the Ocean Race around the world sailing challenge. A tribute from his sailing team Desafio MAPFRE said: 'Our deepest condolences to all your family and friends and for the whole sailing community.

See the the Seahorse charter collection

LASSE was launched in August 1940 in Stubbekobing, when her hull was registered. Her story has not been fully reconstructed, but "Eva" (her original name) was given to Eva Braun by the King of Denmark during a visit before the war.

Less fat, more speed" was the ethos taken when designing and building KUKA LIGHT. This is a special machine, crafted by a very talented and passionate team, with a pure focus on creating a boat that delivers performance and enjoyment in equal measures, thriving in offshore conditions.

The Last Word
For if Men are to be precluded from offering their Sentiments on a matter, which may involve the most serious and alarming consequences, that can invite the consideration of Mankind, reason is of no use to us; the freedom of Speech may be taken away, and, dumb and silent we may be led, like sheep, to the Slaughter. -- George Washington