Brought to you by Seahorse magazine, Scuttlebutt Europe is a digest of sailing news and opinions, regatta results, new boat and gear information and letters from sailors -- with a European emphasis. Contributions welcome, send to

San Francisco, CA, USA: The final two races of the 2016 J70 World Championship were held on Berkeley Circle Saturday. The fleet made the 5 mile trek down to the circle in the customary light morning winds and for one last time, the arduous trek back to the St. Francis Yacht Club in the 20 knots westerly mixed with an outgoing tide and big waves. I think most will agree, the trek was worth it. the Circle served up a challenging week for tacticians. Local knowledge didn't pan out much of the time. What worked on one run didn't work on the very next. It was a very open race course all week and that is what you need when hosting an event for 68 boats.

The winds were light at the scheduled 11:00 start time and Mark Fisher and his race committee postponed for 60 minutes to let the wind fill to 10 knots at the start of the first race. Joel Ronning and his Catapult team, with john Kostecki call tactics and trimming the main, went into the day with a 20 point lead and managed it very well with a pair of 4th place finished to finish with a 16 point advantage over last years World Champion Julien Fernandez of Mexico. Judd Smith and his Africa got off to a huge lead in the first race of the day while we on Calvi Network had a bad first race with a 19th. This switched the two of us in the overall standings.

We on Calvi Network we finished 4th while the fastest boat on the track, Claudia Rossi's Petit Terrible finished 5th in her first World Championship.

This J70 class has a great future. The boat's are fun to sail, especially in breeze, and are very affordable. I would say that the technical specifications and measurement process needs a little improving. But that is to be expected with a class that is virtually exploding with over 1200 boats built in its first 3 years. Next years World Championship will be in Porto Cervo which I am sure will lure close to 100 boats. -- Paul Cayard, cayardsailing.com

In a dramatic last day of competition, two final races were completed with DeVos' cool, calm and very collected efforts winning him the prestigious overall trophy. In what seemed like a last ditch effort to defend his World title, Alessandro Rombelli's STIG with Terry Hutchinson serving as tactician, hammered out a 4-1 scoreline to finish second overall, bumping Jason Carroll on Argo to finish out the podium in third.

Although Carroll (Race Nine) and Rombelli (Race Ten) took home the big race wins, some other teams also shined bright on the course. Andrea Lacorte's Vitamina finished second in Race Nine which enabled him to close the event in the top five, while Morgan Kiss and the 'kids' on Hydra further secured their top Corinthian position with a third place finish.

Fly And Sail Options At The Mount Gay Round Barbados Regatta

The Mount Gay Round Barbados Race Series, which runs from 16-24 January and marks the start of the Caribbean race season, is fast becoming a good charter option for race-thirsty, sun-seekers. Those keen to escape the post Christmas northern hemisphere winter chill, could do worse than sign up for a place on one of the many charter yachts competing at this popular Caribbean regatta.

The event organisers - Barbados Cruising Club in association with Barbados Tourism Marketing Inc and Mount Gay - are preparing for the biggest entry seen for some years in 2017, which means there will be high demand for charter boats/places.

As well as the three-day Coastal Series, guests can look forward to the 60nm Mount Gay Round Barbados Race where it is possible for teams to win their skippers' weight in Mount Gay Rum if they break any of the 14 records. For the adventurous type, there's even a final 265nm Ocean Passage Race to Antigua to link up with the Superyacht Challenge.

Bajan hospitality includes the legendary Mount Gay Rum Red Cap party, and a grand prizegiving party, while on lay-day there's a chance to experience a tour/tasting session at the Mount Gay Distillery, and enjoy a specially laid-on exhibition polo match.

Spirit of Juno and First 40 and Farr 65 (Ondeck Antigua)

Wing Breakage Almost Lost The Cup In 2013
Midway through the America's Cup Match, Oracle changed the way they set up and trimmed the wing. They changed the twist profile, opening the wing more at the top while closing the leech at the quarter-span and half-span of the wing. They also opened the slot between the tab on the leading element and the flap segments of the trailing element. This reduced lee helm and allowed them to foil upwind. These changes increased the load on the wing winch by 170%, far above initial limits. This increased load might have added enough stress in the wing to break the bracket.

Less than an hour before the start of the deciding race, a bracket broke inside Oracle's AC72 wing. Oracle and Team New Zealand were tied 8-8. This race would decide the 2013 America's Cup. The breakage needed to be stabilized or else the control arm for the wing's flap would be jammed and Oracle would be unable to race. -- Jack Griffin, www.cupexperience.com

Nine world-class teams will go head-to-head as the Portuguese capital hosts the global Stadium Racing tour for the first time on 6-9 October.

The new kids on the block are sure to attract plenty of attention with a Thalassa Magenta Racing crew roster that includes some of the world's most successful female sailors.

The new team will race with six crew members, as opposed to five on the all-male boats, and the Canadian-flagged catamaran will be skippered by New Zealand Olympian Sharon Ferris-Choat.

Sailing History On The Block
Items linked to the 1983 America's Cup victory that were previously owned by businessman Alan Bond and yacht designer Ben Lexcen will be auctioned this month.

The catalogue is led by an 18-carat gold model of the winning yacht Australia II on a sea of amethyst quartz crystals.

There are also Lexcen's original plans, drawings and blueprints for Australia II, including his revolutionary and controversial winged keel.

And there is an album of 33 coloured photographs outlining the road to victory, including the design, construction and launch of Australia II.

Auction house Mossgreen's sporting memorabilia head, Max Williamson, said the sale was a one-off opportunity to own a piece of Australia's sporting history.

Seahorse November 2016
What's in the Latest Edition Of Seahorse Magazine 'I stick with it until I win'
Jeremie Beyou is one of only a tiny group of three-time Figaro Solitaire winners, yet he has had less good fortune in his previous two Vendee Globe attempts. But this time it will be different!

Deep background
Among the offshore singlehanded community the Pole Finistere Course au Large in Port La Foret - or POL - is the stuff of legend. Squad member Sam Davies lifts the curtain (a little)

It was about the racing
In motorsport the saying goes, 'When the flag drops the bulls**t stops.' Once the racing in Rio got underway, few could remember what they had been complaining about. Andy Rice 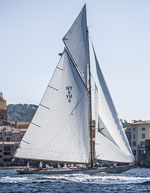 The USA-flagged NYYC 50' class Spartan, dating from 1913, has won the 2016 edition of the Cen-tenary Trophy, the prestigious regatta raced during the Voiles de Saint-Tropez's and reserved to clas-sic yacht one hundred years or more old.

The regatta, raced in a pursuit format with staggered starts, began at 12.30 with the 19 yachts starting staggered defined by a special handicap system, considering their age, size and type of rig. Thanks to a good south-easterly wind of a dozen knots all the boats covered the 9-mile long course in less than two hours.

Spartan, sailed by an American-Finnish crew and debuting in the Mediterranean circuit, was the first on the finish line, off the French village's breakwater, beating 2014 winner Olympian, skippered by Bruno Trouble, for just a few seconds, proving once more that the format is ideal for such a varied fleet and guarantee fair competition and great show.

Third on the finish line was another Herreshoff design, the NYCC 40 Rowdy, at her first participation in The Centenary Trophy that just came of age, having been launched in 1916, exactly one century ago. 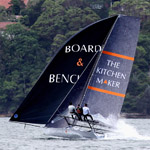 A fleet of 19 teams are registered to compete with the club during the 2016-2017 Season, including two rookie 18 Footer crews, who will mix it with 17 of the hottest 18ft Skiff crews in the world.

One of the biggest changes in the new season's fleet is the absence of the Gotta Love It 7 sponsorship, which was so successful for many years up until the 2015-2016 Season.

Good new, however, is that the 8-times JJ Giltinan champion and former skipper of Gotta Love It 7, is not lost to the fleet. Seve has joined the Asko Appliances team and will sail as sheet hand. Marcus Ashley-Jones will skipper the Asko team and Jeronimo Harrison is for'ard hand. The new team will compete in the skiff which raced as Gotta Love It 7 last season.

Michael Coxon, the 2006 and 2007 JJ Giltinan champion and current NSW champion will again skipper Thurlow Fisher Lawyers and has the same team of Dave O'Connor and Trent Barnabas with him for the major championships in the new year.

National 16 Footer champion Peter Mackie will replace Trent during the first half of the season while Trent follows the fortunes of his young sons as the progress through the junior sailing ranks.

Yandoo (John Winning), Appliancesonline.com.au (David Witt), a brand new skiff for De'Longhi (Simon Nearn), Coopers 62-Rag & Famish Hotel (Jack Macartney) and Compassmarkets.com (Keagan York) will again be amongst the leaders while big improvers last year like Peroni (Nick Daly) and Noakesailing (Sean Langman) should continue to move towards the top of the fleet.

Ker effected an IRC revolution when his relatively lightweight Ker 40s started cleaning up two years ago. This is the latest evolution of the marque.

An excellent choice for a family to cruise and to race in the ORC and IRC.

Very seaworthy yacht, high-performance, easily to sail with small crew: the perfect combination between a competitive racer and an elegant cruiser.

The Last Word
Knowing your own darkness is the best method for dealing with the darknesses of other people. -- Carl Jung