Their first AC75, named Defiant, arrived on Monday and was due at their Wynyard Quarter base on Tuesday.

American Magic's Kiwi crew members are due out of quarantine this week, including star helmsman Dean Barker.

Jason Carrington, the world-renowned professional yachtsman and boat builder is interviewed by Louay Habib for the 13th edition of the RORC Time Over Distance Series.

Jason has become almost legendary for his painstaking attention to detail and his relentless ambition to build the best composite yachts for the most challenging races in the world including: Volvo 60 Assa Abloy, FAST40+ RÁN, IMOCA 60 HUGO BOSS, and AC75 Britannia.

From 1993 to 2006 Jason competed in four editions of the Whitbread and Volvo Ocean Race, as well as record-breaking runs on Mike Slade's Maxi Leopard. 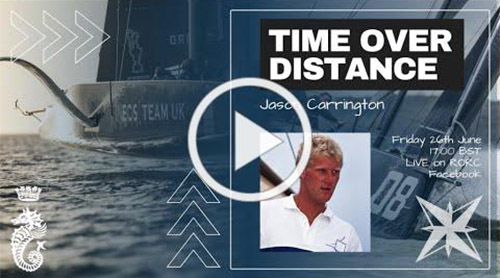 World on Water TV
In this week's "WoW TV":

The Quantum Genoa boys Vittorio and Pietro have the fascinating video of Luna Rossa's Challengr at high speed washing off rounding a mark with both foils down.

All done with Italian finesse and good old Aussie grunt. Watch out dolphins

The upwind trimmer on Platoon gives a Master Class on trimming headsails to win. All sailors will like this.

The One Hour Coast to Coast is on in July 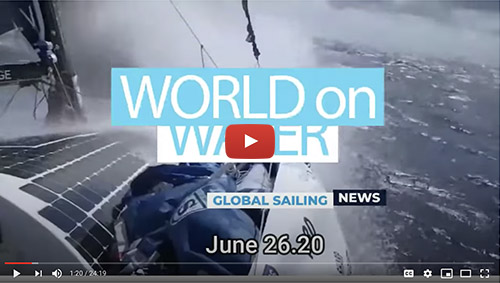 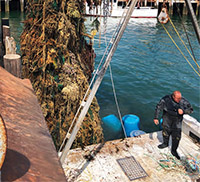 Man has proven excellent at making technical advancements to ease our lives with less than excellent side-effects for other species...

What do shrink-wrap, polystyrene and derelict fishing gear have in common? They are three of the most insidious types of environmental and marine plastic pollution, and create complex, intractable problems on a global scale. The marine industry is taking the lead in tackling all three of them - with funding and support from 11th Hour Racing, an international organisation that works to mobilise sailing, maritime and coastal communities with an innovative approach to inspire solutions for the ocean.

'Looking at land and sea as interconnected and layered ecosystems, we are seeing our plastic footprint show up both on land and at sea, at the surface and below,' says Rob MacMillan, president of 11th Hour Racing, 'While we often talk about ocean plastic pollution in the context of plastic water bottles and consumer packaging, the truth is there are other contributors to the issue. We are committed to supporting solutions that not only prevent plastic pollution, but also advance more circular solutions to plastic waste.'

Full article in the July issue of Seahorse magazine

Solo Maitre CoQ
This Saturday, at 12:47 p.m., Tom Laperche completed the 340 miles of the Solo Maître Coq course, thus winning the 17th edition of the event, and thereby signing his first victory on the Figaro Beneteau circuit. The Brittany skipper - CMB Espoir, took control of the race at the Isle of Yeu during the long ascent to the Birvideaux yesterday morning, then managed to hold off all the attacks of his opponents, including those of Sam Goodchild. On arrival, a difference of twenty seconds between the two.

The first Offshore Grand Prix will leave Cherbourg-en-Cotentin on Sunday 19 July. A new label for the DRHEAM-CUP, under the impetus of organiser Jacques Civilise: "Originally, the third edition was labelled Open de France de France de Course. Because the name "Open de France" already exists in dinghy sailing, to avoid confusion and with the agreement of the French Sailing Federation, we have decided to rename it the "Grand Prix de France de Course au Large". The underlying idea is the same: reaffirm the specific character of ocean racing among the very different worlds of sailing. An event open to all types of sailing boat, all sailors, professionals and amateurs, all formats, crewed, double handed and solo".

There will be something for everyone in the first multi-class race this season, that will bring together over 80 boats between Cherbourg-en-Cotentin and La Trinite-sur-Mer. Three 32 metre Ultime trimarans, Edmond de Rothschild Maxi (Frank Cammas/Charles Caudrelier), Sodebo Ultim' (Thomas Coville) and Actual Leader (Yves Le Blevec) will race on the largest course, the DRHEAM-CUP 1100 (1100 miles). Several Multi50 will take the start of the DRHEAM-CUP 700 (736 miles), including Thibaut Vauchel-Camus' Peloton-ARSEP and Leyton (former Arkema, winner of the first edition of the DRHEAM-CUP in 2016), which will be raced for the first time by skipper Arthus Le Vaillant. Between 10 and 15 Class40s will also be joining in, including Swiss duo Valentin Gautier/Simon Koster's on the recent Banque de Leman and the DRHEAM-CUP (and Route du Rhum) title holding Lombard plan, skippered at the time by Yohan Richomme, and now by Nicolas Jossier, as well as several Multi 2000s (raced by La Trinite-sur-Mer skippers Charlie Capelle and Yann Marilley).

Mirpuri Foundation Sailing Trophy
A pair of VO65s, representing Austria and Portugal, will race in the inaugural Sailing Trophy event off the Portuguese coast.

'Racing for the Planet', the Mirpuri Foundation team will be led by skipper Yoann Richomme who is backed by a star-studded lineup including previous winners of The Ocean Race, Charles Caudrelier and Jack Bouttell.

They will face off against a second VO65 entry led by The Austrian Ocean Race Project, who are preparing to make their first appearance in The Ocean Race in the next edition.

The event is among the first sailing regattas to take place as Europe begins to open up with new safety measures due to the COVID19 pandemic.

Over 50 entries in three classes will race in the two day event, with a €30,000 prize pool at stake.

Strict measures have been put in place by a dedicated medical team to ensure the health of participants and organisers.

More information on the event can be found at mirpurifoundation.org/mfst

18 Footers League Survey
The Australian 18 Footers League are conducting a survey of current and past 18's sailors, spectators and aspiring 18ft skiff sailors. We want to ensure that we deliver an exciting sport that accommodates the changing needs and interests of both sailors and spectators. Your ideas and opinions are important to us and we would be most appreciative if you could please spare a few minutes to fill out our survey.

Vendee-Arctique-Les Sables d'Olonne Skipper Video Conference
Saturday 4 July, at 15:30hrs, 22 skippers from Class IMOCA will set sail to take on the Vendee-Arctique-Les Sables d'Olonne, a unique triangular course, which will lead the fleet to the outskirts of the Arctic circle. A warm-up lap of 3,500 miles (between 10 and 12 days at sea) for the solo sailors on a quest to prepare and qualify for the Vendee Globe.

The Vendee-Arctique-Les Sables d'Olonne is one of the first sports events to make their return in France since the health crisis.

The organisation has adapted to the health conditions still in force so as to protect the skippers, their teams and the public. The 22 IMOCA monohulls will leave their port of registry on 3 July and will remain offshore of Les Sables d'Olonne through until the start on Saturday 4 July.

The organisation is also recommending a 5-day lockdown for the skipper and a maximum of 3 crew who complete the delivery trip together.

As such, we are also proposing some time to chat with the competing sailors from Monday 29 June until Thursday 2 July from 09:30 to 10:00hrs.

Click on the image below to register on Doodle. I will then send you the Zoom links o you can connect to L'Arctique Cafe. -- Aline Bourgeois

The annual Endeavour Trophy invitational event to determine the champion of champions from the most popular dinghy racing classes has been put on hold until 8-10 October, 2021.

The restrictions imposed this year, to help manage the spread of the Covid-19 virus has brutally affected the usual dinghy national championship calendar. With a lack of Endeavour entries (national champions) therefore, the Endeavour Trophy organising committee had no option other than to postpone the 60th anniversary event until October 2021.

With plans now in place for an even bigger, and better 60th anniversary in 2021, competitors now have plenty of time to prepare for next year's class championships for a chance to win a 'ticket' to the 2021 Endeavour Trophy.

Six time-winners Ben Saxton and Toby Lewis will be back to defend their title, along with the likes of other former winners, competitors, and Olympians such as Nick Craig, James Peters and Luke Patience who will no doubt be contesting their own battles to secure a place on the start line at the 2021 Endeavour Championship.

Extremely high-quality Spirit of Tradition yacht to Sciarrelli designs and built in mahogany. Stunning lines and beautifully maintained, she perfect for the passionate sailor is looking for timeless beauty and value.

Designed by Tony Castro, the SB20 is a British-built strict one-design 6.15m keelboat conceived as a wide appeal, affordable, competitive sportsboat for teams of three or four sailors. It is also, arguably, the most successful sportsboat in the world with 800 owners competing regularly in a programme of exciting local, national and international events.

Originally known as the Laser SB3, the SB20 continues to deliver on its pioneering promise: a boat that is fun, fast and easy to sail by anyone of any age; the best value-for-money sportsboat in the market.

The FAREAST 28R is a new production racing sailboat by Simonis & Voogd that delivers the excitement of One-Design (OD) racing under 30′.

The Last Word
Moral authority has been laid to rest, world opinion is no more than a game show and the difference between good and evil is about as relevant as changing channels. -- Ralph Steadman